What every parent should learn about fear and the amygdala

Teenage terror and anxiety ended up being the hot topic last week in Hollywood when I was at Real Screen, an annual conference for reality shows. When I told people about my recent TEDx talk, “The Surprising Power of Fear”, and how I often help executives make friends with fear – the confessions poured out. Stories about kids surprised me the most. If you have teenagers, maybe you can relate to some of these or have your own stories:

“My son just got his driver’s license and he won’t drive anywhere; he’s petrified he’s going to die in a car crash.”

“My 12 year old is so stressed out by being on the all-star team he told the boy batting before him to try to get out so he wouldn’t have to bat.”

“Last week a Trumble High sophomore overdosed on heroin in the Starbucks bathroom. He told his guidance counselor he couldn’t handle all the tests he had to take. “

Parents usually don’t know that people under 25 years old have special considerations when it comes to fear and anxiety because of what’s happening to their brains. Most parents and teachers do not really understand what’s going on in the all-important organ of an adolescent brain.

If you are a parent or are involved with young people, knowing what’s happening inside their noggin can make a huge difference in their lives and yours.

What shocked me in L.A. was listening to so many parents with deep emotional pain rasping in their voices, eyes welling up, embarrassed to share with me their children’s fears, as if they had failed to protect them completely. It compelled me to write this blog to share one important message with parents with stressed out, troubled, high anxiety or even suicidal kids:

If your kid is under 25 there is a lot of hope left and you can still make a massive difference in their life. If they are over 25 the future isn’t quite as rosy, but the good news is it’s never too late to change the wiring of your brain to tame fear.

There are two primary parts of the brain that come to life in a fearful situation and then a third one that fuels anxiety, which is actually a lower grade form of fear.

Ground zero for fear: the amygdala.

The amygdala is a small almond shaped gland situated at the base of your brain on both sides. It creates the fight, flight or freeze response and (3Fs) can highjack your central nervous system without you even knowing it. The amygdala is fully developed at birth. Why? To keep you from getting flattened by a woolly mammoth.

The second part involved with a fearful situation (in fact the part that is most responsible for peak performance and happiness) is the pre-frontal cortex (PFC). The PFC allows you to take control over your amygdala because over the last 100,000 years, we found that freezing like a deer in the headlights when you hear a loud noise or bolting like a cheetah when you see the grass rustle doesn’t really help our ability to survive. The PFC evolved to provide adult supervision to the amygdala.

Here’s the rub: The PFC isn’t fully developed until you are in your mid-20s.

A huge mistake parents make is trying to keep kids from experiencing fear. The wiring between the amygdala and the PFC can be strengthened and developed sooner by learning to deal with fear in a healthy way.That’s why I tell everyone they should scare themselves as often as they can. The same is true for your kids. Every time you or your kids scare yourself, the neurons that control fear will wire more strongly together, making it easier to deal with stressful situations in the future.

Many parents do their best to keep their children from stressful situations; paradoxically their kids never build a healthy relationship with fear. The best thing you can do is scare your kids. If you find something that scares them or stresses them out, then you ought to first reframe their assessment of the situation, and second help them tame their instinctual reactions. Once it’s reframed from a threat to an opportunity, teach them self-talk (“I can do this”)– and they will gradually start to believe what they are saying.

Anticipatory anxiety is something that creates a false sense of fear based on what you think might happen. Humans are the only animals that can imagine a future and it’s a blessing and a curse. If you picture yourself falling off a cliff and dying, you are creating anxiety by anticipating the fear. This engages the third part of the brain that I alluded to earlier – the hippocampus . It will create a fear memory when you’re on a cliff unless your PFC talks some sense into it. So you went from experiencing an instinctual fear in the amygdala, if it was never overridden by logical reasoning from the PFC, you now have a feeling via the hippocampus that enforces anxiety. Like any other part of the brain the more this cycle repeats itself, the tougher it is to change. Hence the old adage of getting right back up on the horse once you’re thrown off. 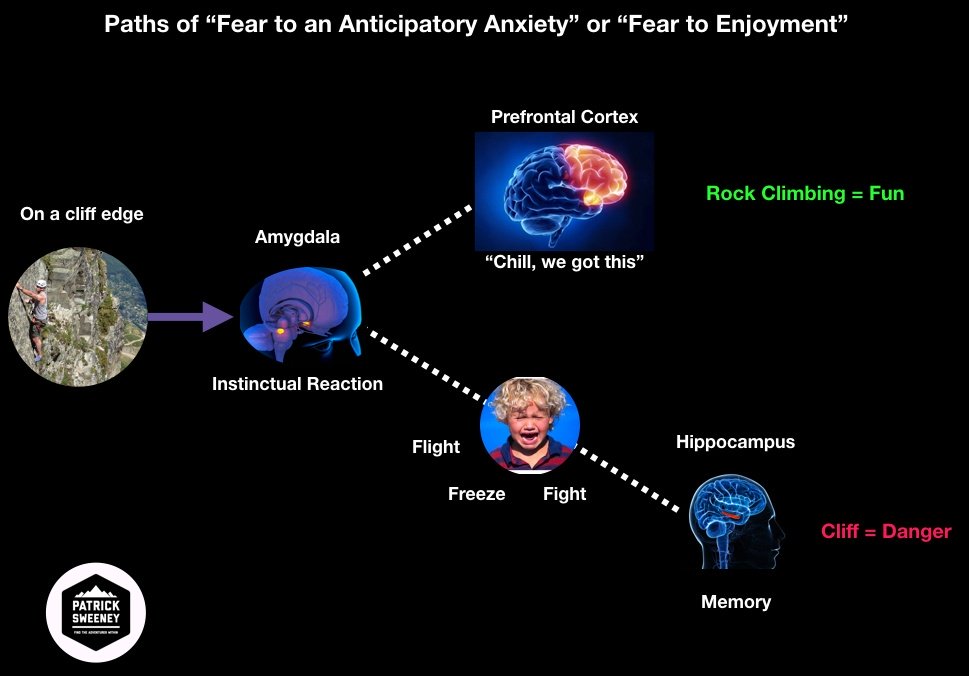 I love rock climbing and my oldest child took to it pretty quickly, the middle one a little slower, but still enjoyed it. My youngest had a paralyzing fear of heights. Before I became a fear guru and started spending all my free time researching fear and meeting with the world’s top neuroscientist and psychologists, I would scream at him to “man-up” and just climb up the rock. It wasn’t long before he started to avoid rock climbing because he created an anticipatory anxiety around it. So he didn’t climb with the family. It was sad and it was my fault.

When I figured out what was happening inside his brain, I came up with a new plan. I forced him to come rock climbing with us. He didn’t have a choice and the first couple of times were tough to get him in the car. But instead of screaming at him, which enforces his amygdala’s “fight” reaction, when he got three or four moves up a climb, I stopped him and engaged his PFC, the adult supervision of the amygdala.

When my son took a break on the climb, I told him to focus on his breathing for four breaths (this stabilizes his heart’s rhythm). Then I asked him if right in that moment he was safe. Were the ropes properly set up, had we all just done the same climb safely, and finally would we all high-five him when he finished the climb? It was all getting him to use his PFC to ask questions and answer them which would send a signal to his amygdala that he was not really in danger. So he climbed another five or ten moves, and we stopped and repeated the same exercise. As someone not exactly know for his patience it was hard work, but the pay-off was huge. And thankfully my wife took a few turns as the belayer-coach. 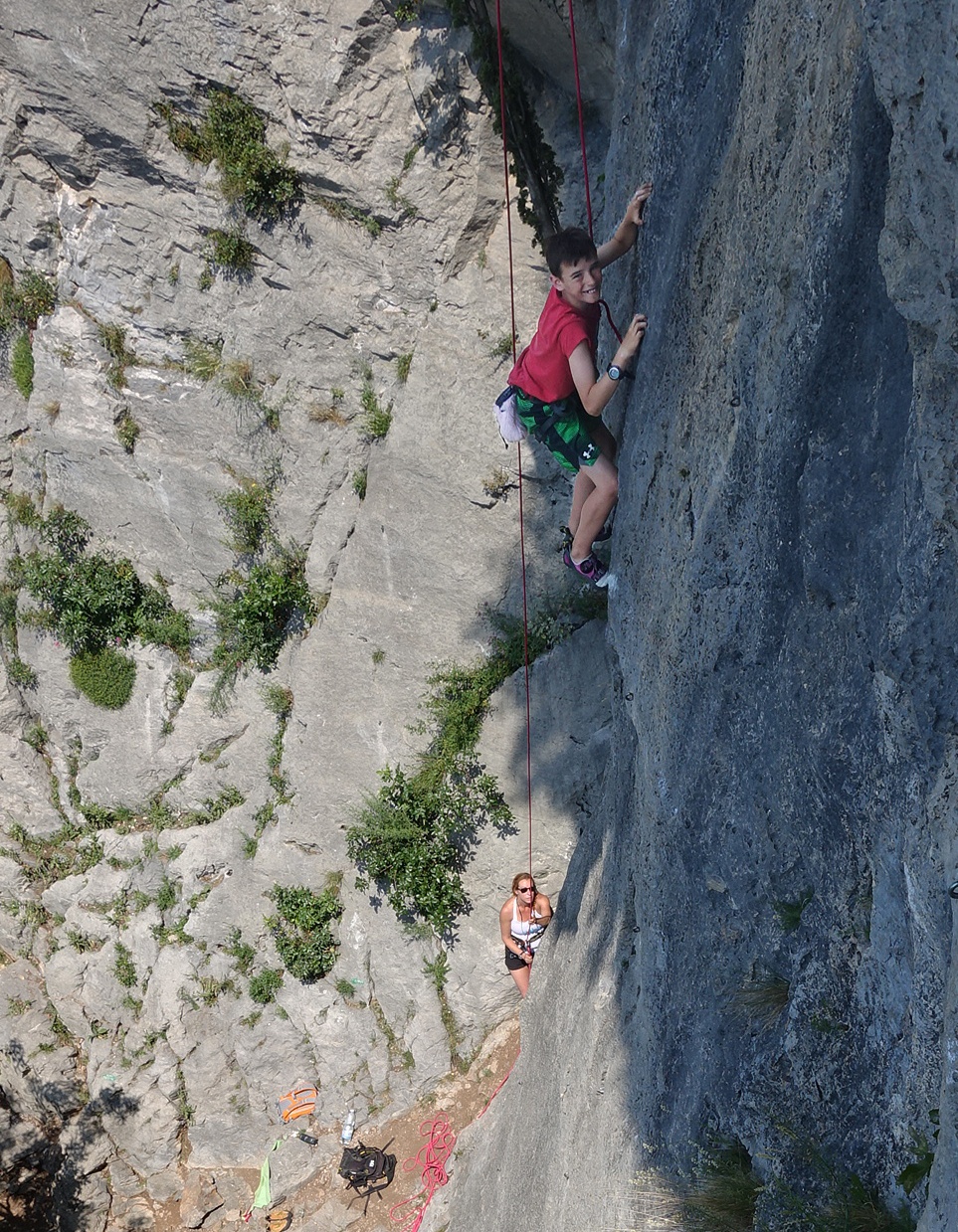 Declan, our youngest, now enjoys climbing almost as much as the other two. He’s learned a great sense of accomplishment from finishing tough routes, he’s picked up invaluable skills for dealing with tough situations, and he’s wiring the neurons in his brain that can control the fear response. All of this will combine to develop stronger connections than he might have if he waited until he was in his 20s or 30s to find courage (like I eventually did).

If you want your kids to learn bravery easier and faster than through trial and error try this out:

If you are fascinated by the subject of fear, the latest research, and how you can use fear for peak performance subscribe to my monthly newsletter and follow me on LinkedIn & Facebook – you’ll be among the first to know when my book on fear is published!

Patrick Sweeney is one of the Top Keynote Speaker of 2017 as rated by Young President’s Organization, and Google Talks in the EU. He only works with a handful of companies each year to make sure the events are engaging and customized, not a cookie-cutter speech for every event.